This is the Full Report of the Stakeholders Engagement for the Review of the National Blockchain Adoption Strategy Framework held at eGovernment Training Centre (eGTC), Public Service Institute of Nigeria (PSIN), Abuja FCT, Thursday 5 November 2020. PDF version is available here.

“Blockchain is an emerging technology that provides a secure and fault-tolerant distributed ledger platform for transactions. It will facilitate the development of the Nigerian digital economy and will enable citizens to have more confidence in digital platforms.” – The draft National Blockchain Adoption Strategy Framework

The idea of a National Blockchain Adoption Strategy Framework stems from the need for the Nigerian government to leverage on the potentials of blockchain technology for national advancement.

Essentially, the National Blockchain Adoption Strategy Framework, as a national document, identifies strategies for the “adoption of the blockchain technology by government in its digital transformation agenda.” The objectives and initiatives that will be actively pursued by the Federal Government through designated Ministries, Departments, and Agencies (MDAs) are also stated.

SiBAN was specially invited by NITDA to send its delegates to the Stakeholders Engagement. The delegates will also effectively become members of the TWG. Accordingly, SiBAN, through the Caretaker Committee, appointed the following persons:

Together, the two delegates are to primarily represent the best interest of the community, particularly SiBAN members and the emerging blockchain industry by focusing on policy, regulatory, and business concerns raised by the draft National Blockchain Adoption Strategy Framework.

The Stakeholder Engagement for the Review of the National Blockchain Adoption Strategy Framework held on Thursday 5 November 2020 with stakeholders from both the public and private sectors. Apart from National Information Technology Development Agency (NITDA), the organizer of the Stakeholder Engagement, attendees include representatives from the following bodies:

For clarity and easy reference, as listed in the proposed draft Framework, below are the institutions that have a role to play in its implementation:

After arrivals and registration of delegates and other participants, the Stakeholders Engagement started 10:00am. The program includes the national anthem, welcome address, goodwill messages, special remarks, tea break, presentations, breakout session, plenary session, vote of thanks, and lunch & closing.

The welcome address was briefly delivered by Dr. Usman G. Abdullahi, Director, IT Infrastructure Solutions, NITDA. In his well one address, Dr. Abdullahi emphasized the need for Digital Nigeria to be achieved and how the proposed National Blockchain Adoption Strategy Framework will help Nigeria leverage on blockchain as one of the emerging technologies to boost trust, transparency, and accountability. He enjoined all stakeholders to actively participate.

Goodwill messages were also delivered, upon invitation by the organizers, by a number of representatives of various stakeholders in the blockchain industry, including Chuta Chimezie and Senator Ihenyen on behalf of BNUG and SiBAN respectively.

Upon invitation to the podium to give a goodwill message on behalf of SiBAN, below are Senator Ihenyen’s words:

On behalf of our people at SiBAN all across the country, I am particularly delighted that a day like this has come. We realized the huge potentials that the blockchain has when we talk about bringing innovation into the space. And when we talk about innovation, we are not just talking about innovation that is limited to one sector. Blockchain is that technology that holds promise across every sector of the economy, whether it is agriculture, security, logistics, transportation. We have seen the successful implementation of the blockchain in other countries. As my President at SiBAN, Mr Paul Ezeafulukwe would always say, ‘Blockchain is for Africa’. At SiBAN we believe that more than any other continent,  blockchain is for Africa. When it comes to blockchain, we are looking at an opportunity to restrategize and change the future [and] secure the future of our country for the youth and everyone as well. So I’m particularly delighted to be here and I can assure you that my constituency, which is SiBAN, will contribute successfully to this program”.

Kashifu Inuwa Abdullahi, NITDA Director General/CEO, gave a brief special remarks. According to the NITDA Boss, Nigeria wants to be “strategically placed to capture value from the economic potential of blockchain”. Considering Nigeria’s huge youthful population and the country’s position in Africa, the NITDA Boss said it was looking at how Nigeria could get at least around 6 to 10 billion dollars from blockchain by the year 2030.

He thanked stakeholders for their contributions so far and enjoined everyone to participate actively in the review of the draft National Blockchain Adoption Strategy, which according to himz is not caste in stone.

Melissa Amouny, a blockchain expert, delivered a virtual lecture on “Blockchain in other jurisdictions: A Review of 10 National Blockchain Strategies”. It was a brief comparative analysis of blockchain strategies in jurisdictions such as Estonia, Malta, Switzerland, UK, and others. Generally, the strategies included sandboxes, special tax arrangements, developmental regulation, legislative changes, etc.

Chuta Chimezie, founder of BNUG, presented “Nigeria Blockchain & Crypto Assets Landscape: Reports from the Trenches”. In his presentation, Chuta Chimezie introduced the audience to BNUG and took them through the present landscape of the blockchain & crypto industry in Nigeria. Adedeji Owonibi, Senior Partner, Financial Forensics/Virtual Assets at A&D Forensics, briefly handled the digital-asset fraud, risks, and compliance aspect of the presentation.

This session was anchored and administered by Dr Ayodele Bakare and Dr Abubakar Dahiru, both from NITDA. In order to ensure proper coordination, delegates were required to submit their reviews orally under each section of the draft National Blockchain Adoption Strategy, should they have any review for the section under review.

What follows below is an overview of the section-by-section review of the draft framework at the Stakeholder Engagement:

Vision: Use Blockchain technology as a platform for the transition into a digital

Flowing from the immediate submission above, a stakeholder observed that the proposed draft Framework should also focus on blockchain applications outside the financial services industry such as agriculture, oil & gas, etc., in order for a more robust approach to adoption of blockchain adoption in Nigeria.

Senator Ihenyen, on behalf of SiBAN, submitted that this part needs to be reviewed in a manner that is not vague, ambiguous, or overgeneralized. He suggested that the legal/regulatory framework aspect of the draft be reviewed to be sector specific so that the relevant regulators under such sectors will approach legal/regulatory matters from the general principles or regulatory standpoints for their respective industries. This approach, according to Senator Ihenyen, will avoid the  likelihood of having regulators hide under the vagueness and ambiguity of the legal/regulatory framework, and consequently render the National Blockchain Adoption Strategy a mere literature.

SiBAN’s stand above effectively corroborates the stand taken by a delegate of the Securities and Exchange Commission (SEC). According to the SEC delegate, the National Blockchain Adoption Strategy contains much “literature” without specific strategies and guidelines.

The proposed Strategy Framework for blockchain adoption is built on the following 6 key initiatives:

Review is as follows:

Review is as follows:

Reviews, observations, and suggestions are as follows:

As announced by NITDA at the program, other suggestions, observations, or improvements may be emailed to the Technical Working Group (TWG). This may also cover strategies and roadmap.

Engr Babagana Digima, Head of Digital Economy Department at NCC, gave the vote of thanks. In their communications with SiBAN delegates, NITDA also expressed its appreciation for SiBAN’s participation and contributions. Other stakeholders, including CDIN, used the opportunity to emphasize the need for collaboration among blockchain associations, groups, or bodies in Nigeria.

(It is in the spirit of collaboration driven by the need to protect and represent the interest of players in Nigeria’s emerging blockchain that SiBAN proposed in September 2020 a Joint Committee on Digital Assets Application, Policy, and Regulation in Nigeria [JCDAAPRiN] to CDIN, BNUG, and FinTech Association of Nigeria (FinTechNGR).

After a brief photograph session of stakeholders in attendance, stakeholders and other participants proceeded to lunch, effectively closing the one-day stakeholder engagement.

SiBAN had a successful outing at the stakeholders engagement in Abuja. Not only was SiBAN ably represented but the interests of its members were also represented, ensuring that whatever comes out of the proposed National Blockchain Adoption Strategy Framework does not work against the interest of Nigeria’s emerging blockchain & crypto industry.

To enhance SiBAN’s stakeholder engagements—whether regarding NITDA’s ongoing National Blockchain Adoption Strategy Framework, SEC’s Statement on the Classification and Treatment of Digital Assets, and others—it is vital that all players get involved. Everyone is encouraged to get involved. Policy and regulation cannot be left to the hands of a few persons only, whether expert or not. Policy and regulation concerns everyone.

NITDA expects further submission of suggestions and comments, if any, from stakeholders via email. Through the platform of the Technical Working Group (TWG) to which SiBAN’s two delegates have been included, SiBAN will be representing the interest of its members and stakeholders in the blockchain industry. If you wish to send any suggestions or observations through SiBAN, please email info@siban.org.ng before Wednesday 11 November 2020.

Report written and submitted by SiBAN delegates in the NITDA Technical Working Group on Review of the National Blockchain Adoption Strategy and approved by the SiBAN Caretaker Committee: 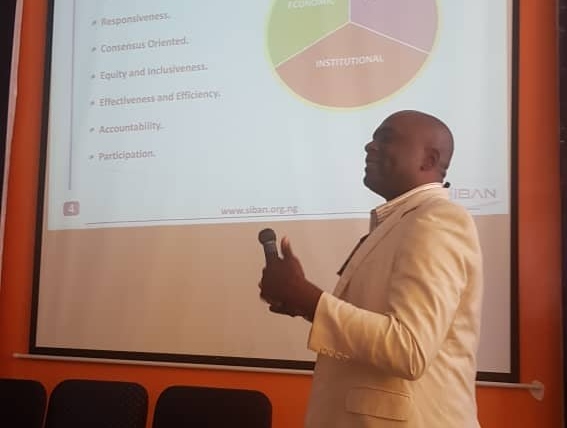